In a universe where the passage of time
Can be measured by the disappearance of a mountain
One touch of a birds feather once in a thousand years
Where the galaxies are numbered in trillions of trillions
And in each are countless stars and planets like our own
You think your existence matters one jot?

The answer? Of course it does, why else would you
Be gifted a brain capable of understanding the Universe,
A brain which itself contains eighty-six billion neutrons
And it is estimated a whopping great 500 trillion synapses
You are as marvellous and as complex as all the galaxies
And all the stars and planets and every atom put together.
The human brain has some 8.6 x 1010 (eighty-six billion) neurons. Each neuron has on average 7,000 synaptic connections to other neurons. It has been estimated that the brain of a three-year-old child has about 1015 synapses (1 quadrillion). Estimates vary for an adult, ranging from 1014 to 5 x 1014 synapses (100 to 500 trillion).

Don’t confuse astronomy and astrology
Yes, they are both about finding meaning
In the study of the stars.

One is about observing the motion,
Of the planets through the heavens
Oh, and so is the other.

They both use complex charts and tables
To predict the future and understand the past,
And draw on a great body of knowledge

One tells me things I find unbelievable
That most of the Universe is hidden from our sight
Tied up in dark matter and dark energy.

The other speaks of my destiny and the
Unfolding future, of life and love,
Which is much easier to believe.

The scientists call it
Non-locality
I call it
The Song

You. Me. The stars
The whole of creation
A common bond
Connects us all

And when you can
Hear the song that you sing
You too will know
That all is One.

Maeshowe is another one of the Neolithic wonders on Orkney. A vast chambered tomb it stands on an ancient trackway that connects it to the stunningly well-preserved village of Skara Brae, as well as passing near the Standing Stones of Stenness and the Ring of Brodgar.

Once more the poem The Seer provides a (mythical) answer.

Stonehenge, Avebury, The Ring of Brodgar, Callanish and hundreds of lesser stone circles are to be found in the British Isles and elsewhere. But which was the first and from where did the knowledge that went into their building originate? Dating information indicates that the very first, the Mother and Father of all the Great Circles of Stone, was the Stone Circle of Stenness, to be found on the Isle of Orkney.

Which in turn gives rise to a great mystery.  From where came the knowledge to build the first Stone Ring at Stenness? And to place the alignments with the Solstices?

The Poem the Seer (of Stenness) gives one explanation, albeit mythical. The poem is available here

I rather like it when scientists come up against something they can’t understand.  Tabby’s star is one such conundrum.  Its behaviour is – pun intended – out of this world.

It’s light dips massively above the 1% a Jupiter sized planet moving in front of it would cause; as much as 15% and 22% have been recorded. The equivalent of something massive enough to obscure half of the surface area of the star. And when it does brightens again, that too is not as expected. Instead of the dip and the rise being the same shape, as current theory says it should, they do not match.  Furthermore, even the occurrence of these dips is irregular and difficult to explain.  Finally, to add to the mystery, apparently, Tabby’s star has been getting progressively dimmer over the last 100 years or so, (the star was first observed in 1890).

The name “Tabby’s Star” or “Boyajian’s Star” refer to the initial study’s lead author, Tabetha S. Boyajian. The star’s proper nomenclature is  KIC 8462852.  It didn’t show up in a computer led search for exoplanets and was found by good old fashioned humans.  These same humans have come up with many explanations for the behaviour of the star, including of course, aliens at work.  But currently, there are no explanations that fit the observations.  Although there are a lot of astronomers working on the puzzle and trying to come up with said explanations.  Just google “Tabby’s star” and see.

Which I rather like! One little pointer to the fact that we still have a lot to learn about this Universe that we live in!!

It’s remarkable that it is only just over a century before the first flight of an aeroplane, and yet, passing brightly and rapidly overhead was a spaceship carrying six other human beings.

Now there is talk of a Mars colony, a return to the Moon, and even light sails that can cut the journey to another Star to years rather than decades.

But I wondered what human-kind would take into deep space along with them. Greed, hate, intolerance, probably.

But I hoped not.

And then I thought again of the International Space Station that I had seen earlier. It was built by former enemies, now working in cooperation, it carried men and women of different nationalities, people with courage and resolve, prepared to journey through Earth’s atmosphere to get to it and back, let alone to orbit for months in that tiny, fragile tin can. And then to live and work together.

And my heart grew lighter.

Currently, Scholz’s star is a small, dim red dwarf in the constellation of Monoceros, about 20 light-years away, and now moving away from us. However, about 70,000 years ago, it just grazed the outer reaches of the solar system as it wandered by, accompanied by its brown dwarf companion.

At the closest point in its flyby of the solar system, Scholz’s star would have been a 10th magnitude star – about 50 times fainter than can normally be seen with the naked eye at night. But because it is magnetically active, such stars can “flare” and briefly become thousands of times brighter. So it is possible that Scholz’s star may have been visible to the naked eye by our ancestors 70,000 years ago for minutes or hours at a time during these flaring events.

What would our ancestors have made of this stranger in the heavens? What would we have made of it a thousand years ago if it were passing by us then and not 70,000 years previously?

What a wonderful title for a tower, and no, it’s not found in the Lord of the Rings trilogy. Instead, it stands inside the Vatican and was built to answer, in effect, the question, how long is a day.  The answer that they came up with was not 24 hours, but rather 23 hours and fifty-six minutes.

The Tower of the Winds was built between 1578 and 1580 as a means leading to the reform of the Julian calendar which had been in use since 45 BCE. At midday, the sun shines through a hole in the wall, and illuminates a large sundial inscribed on the floor of the tower, and thus provided the means of calculating the true length of a day. 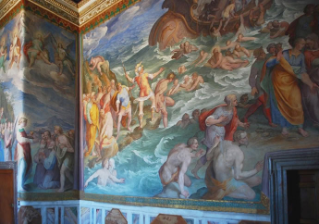 The Gregorian calendar that followed introduced the leap year as a means of compensating for the real length of a day.

As the photo shows, the Tower is richly decorated and is one of the highest points in Vatican City.

But predating that is an even older Tower of the Winds, to be found in Athens.  I can do no better than quote from the Athens Tourist Information web site, viz:

The Tower of the Winds is found in the Roman Agora of Athens, between the quarters of Plaka and Monastiraki. This is among the most famous sights of Athens. A 12-metre-tall structure with a diameter of 8 metres, this tower has an octagonal shape. It was made of fine Pentelic marble probably around 50 B.C. by the Greek astronomer Andronicus of Cyrrhus. This tower has many uses in ancient times. It was originally constructed as a timepiece, that is to estimate time, based on the position of the sun. It was also used for weather indicating and forecasting. The tower features a combination of sundials, a water clock and a wind vane. In fact, its frieze depicts the eight wind deities according to their direction: Boreas (N), Kaikias (NE), Eurus (E), Apeliotes (SE), Notus (S), Livas (SW), Zephyrus

I look to the heavens for meaning, not for science, although I find meaning in the science.

I feel the weight of all of humankind who have also gazed up on a starry night and wondered about the meaning of life, the Universe, and their own destiny.

Were their questions mine?  I suspect so, and what answers did they find?  What knowledge did the Wise Seers amass? The Druids, for example, spent 30 years learning their craft and were renowned in antiquity for their knowledge of the heavens, and before them, came the builders of the Stone Circles which predicted the movement of the Cosmos.